Notably, an English translation did not appear until 1851, by Thomas Buckingham Smith, after the Mexican War. Buckingham Smith was followed by Fanny Bandelier (1904), which stood for years as the standard, until Martín A. Favata and José B. Fernández’ Account (1993). The definitive is now the bilingual, three-volume Álvar Núñez Cabeza de Vaca: His Account, His Life, and the Expedition of Pánfilo de Narvaez, by Rolena Adorno and Patrick Charles Pautz (1999), with a condensed version available in paperback (2003). Castaways, translated by Frances M. López and introduced by Enrique Pupo-Walker, provides a reliable, student-friendly volume. 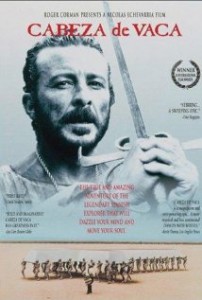 Cabeza de Vaca is commonly cited as a metacanonical figure, a placeholder or marker for broader trends in literary history. Gabriel García Márquez cites Cabeza de Vaca in a case for claiming Latin American identity apart from Spanish language and hegemony in “Fantasía y creación artistica en América Latina y el Caribe” (1998). Pupo-Walker emphasizes the sophisticated reordering of events in the Introduction to the 1993 translation Castaways, and like García Márquez, presents Cabeza de Vaca as central to the tradition of Hispanoamerican narrative. Ralph Bauer folds the account into a broader effort to decouple colonial literatures of the Americas from a United States that did not exist; Bauer has made the case repeatedly, most concisely in “Early American Literature and American Literary History at the ‘Hemispheric Turn'” (2010).

In Chicano studies, Cabeza de Vaca often appears as a figure of firstness. Echoing García Márquez, Juan Velasco puts the lost conquistador at the forefront of Chicano memoirists in “Automitografias: The Border Paradigm and Chicana/o Autobiography” (2004). In Reading and Writing the Latin American Landscape, Beatríz Rivera-Barnes situates dashed hopes against the God-like, regionally-defined hurakan (2009). Cassander L. Smith, in “Beyond the mediation, Cabeca de Vaca’s Relación and a Narrative of Negotiation” (2001), focuses on Esteban to note figures outside the text, not only in Cabeza de Vaca’s account, but in early American studies. Focusing on the Echeverría film, Luisela Alvary shows how Cabeza de Vaca’s story occasions a reconsideration of colonialism in “Imag(ni)ing Indigenous Spaces: Self and Other Converge in Latin America” (2004).

More narrowly, the Narváez expedition had marked regional or national pride. There is the timing of Buckingham Smith’s translation after the Mexican War and increasingly aggressive policies in the United States towards Latin America; in a speculative essay, “The Gulf of Mexico System and the ‘Latinness’ of New Orleans” (2006), Kirsten Silva Gruesz cites the gulf basin, limned by Cabeza de Vaca, as a border space between Spanish America and a commerce-driven United States. Turning manifest destiny to local history, a 1925 article by A.H. Phinney flagged the precise Narváez landing spot (with no regard for coastal morphology) at Johns Pass, in present-day St. Petersburg beach; see “Narvez and de Soto: Their Landing Places and the Town of Espirito Santo” (1925). Texas has its Cabeza de Vaca, while Floridians point to Indians mounds and claim him as their own.

The broader world of criticism follows several streams, with a pronounced disconnect due to language differences across disciplines. Colonial Latin Americanists letters read Cabeza de Vaca’s accounts against related narratives, and in the context of sixteenth-century transatlantic debates about the moral terms of conquest. José Rabasa discusses textual acts of violence in Writing Violence on the Northern Frontier: The Historiography of Sixteenth-Century New Mexico and the Legacy of Conquest (2000).

Attention to the literature of discovery boomed in the early 1990s due to the 500-year anniversary of Columbus’ voyage and the emergence of poststructuralist-postcolonial theory. Both shaped Cabeza de Vaca scholarship. Tzvetan Todorov’s classic The Conquest Of America: The Question of the Other (1992) examined semiotic exchange through an ethical lens. Stephen Greenblatt’s Marvelous Possessions: The Wonder of the New World (1992) deeply influenced the conversation, though without addressing Cabeza de Vaca specifically; one year earlier, in a special issue of the journal Representations edited by Greenblatt, Anthony Pagden would articulate the problem of establishing auctoritates, or the use of the self (or witness), to free direct experience from an enclosed hermeneutic loop; see his superlative study, “Ius et Factum: Text and Experience in the Writings of Bartolomé de Las Casas.” Carmen Moreno-Nuño treats the role of language in the Spanish conquest in “Cabeza de Vaca’s Relación in Light of Deleuze and Guattari’s Semiotics and Theory of Language” (1997). Anticipating arguments of the 1990s, Sylvia Molloy’s “Alteridad y reconicimiento en Los Naufragios de Alvar Núñez Cabeza de Vaca” (1986) skillfully positions the narrator of the Relación between an imperial audience and an American space of alterity.

Given the protean qualities of a text that seems to draw from many genres, and its rhetorical dislocation as it speaks from the Americas to readers in Spain), much of the criticism struggles with where to place Cabeza de Vaca. Juan Bruce-Novoa notes the confusion of names, at the heart of Chicano identity, describing the figure he calls “ANCdV” as a castaway in tidal signifiers; see his “Shipwrecked in the Seas of Signification: Cabeza de Vaca’s Relación and Chicano Literature” (1993). Bauer describes Cabeza de Vaca from within a conflict of epistemes and ideas of empire in The Cultural Geography of Colonial American Literatures: Empire, Travel, Modernity (2003). Alan J. Silva draws heavily from Homi Bhabha to emphasize Cabeza de Vaca’s negotiations from within a “middle spaces” in “Conquest, Conversion, and the Hybrid Self in Cabeza de Vaca’s Relación” (1999); Silvia Spitta portrays him as an early figure of “transculturation” (again, the firstness), as one negotiating between shamanistic practices and Christian discourse, in Between Two Waters: Narratives of Transculturation in Latin America (1995). Steven P. Liparulo notes semantic instability in “‘From Fear to Wisdom’: Augustinian Semiotics and Self-Fashioning in Cabeza de Vaca’s Relación” (2006). Through deep and wide reading of interwoven accounts, Rolena Adorno shows how Cabeza de Vaca’s vulnerability led to complex representations of the relations between different groups in “The Negotiation of Fear in Cabeza de Vaca’s Naufragios” (1991). Maureen Ahern pulls together theoretical terms and the prevailing interest amongst historians at the time in a frontier “go-between” to show (like Adorno) how Cabeza de Vaca mediated signs of verbal and religious order in “The Cross and the Gourd: The Appropriation of Ritual Signs in the Relaciones of Álvar Núñez Cabeza de Vaca and Fray Marcos de Niza” (1993).

The scholarship is unusually rich. ANCdV’s variously-titled work holds equal value to archaeologists, historians of the Gulf South and Latin Americanists; to historians of empire and native Americans; and to students of colonial Latin America literature as well as what would become (ahistorically) the United States. Conclusions about his legacy often follow separate streams of scholarship, and at this point, the most important contribution would be a single volume that synthesizes the interpretations into one volume, pulling together the range of perspectives that he continues to represent. Such a book would soon find its place on library shelves. What did I miss or misrepresent? Contact me.

Ahern, Maureen. “The Cross and the Gourd: The Appropriation of Ritual Signs in the Relaciones of Álvar Núñez Cabeza de Vaca and Fray Marcos de Niza.” In Jerry M. Williams and Robert E. Lewis, eds. Early Images of the Americas: Transfer and Invention. Tucson: University of Arizona Press, 1993. 215-44.

Alvaray, Luisela. “Imag(ni)ing Indigenous Spaces: Self and Other Converge in Latin America.” Film and History: An Interdisciplinary Journal of Film and Television Studies 34, no. 2 (2004): 58-64.

_________ . Writing Violence on the Northern Frontier: The Historiography of Sixteenth Century New Mexico and Florida and the Legacy of Conquest. Durham: Duke University Press, 2000.

Todorov, Tzvetan. The Conquest Of America: The Question Of The Other. Transl. Richard Howard. New York: HarperPerennial, 1992.