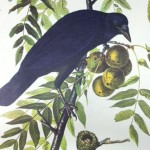 We compare two illustrations of the same bird, the American Crow — an 1837 engraving by Robert Havell, from the first edition of John James Audubon’s Birds of America, and a lesser Julius Bien lithograph, completed in New York just before the Civil War.

When I reach the museum, I am dripping with sweat. I rode my bicycle, not a good idea in Alabama. Not recommended for August, particularly when I am making a first impression. New to campus, of course, I get lost. Even though the campus art museum is on College Street, a main drag, I somehow wind up in one of those housing developments, the kind with overbuilt colonial homes and a naturey-name, that seem to be popping up in southern university towns. I had to call for directions.

Scott, the education curator, greets me, shows me the wash washroom, then takes me to the basement where the staff works and the collections are housed. She has left two Audubon prints on a big table. I am here to look over the prints, hopefully incorporate the museum’s holdings into a nature writing class for the coming Fall semester. We compare two illustrations of the same bird, the American Crow — an 1837 engraving by Robert Havell, from the first edition of John James Audubon’s Birds of America, and a lesser Julius Bien lithograph, completed in New York just before the Civil War. We talk about Audubon’s travels through antebellum America and nineteenth-century print culture. Scott explains the difference in quality between the Havell, pressed from a copper plate in London, and the Bien. For the uninitiated, Audubon print history can be a confusing mess: I know about the famous double elephant folio, which portrayed each bird appears to life, and the smaller octavo edition — or “poor man’s Audubon.” But a dizzying range of spurious editions have appeared since then, from a magisterial reproduction of the originals completed in 1971-72 (known as the Amsterdam edition), to the countless others reproduced on coffee mugs, hanging on hotel lobbies, available in gift shops, there’s even an Audubon flamingo on the flag at my racist neighbor’s house.


Scott (who is a she) gives me a jewelers glass to study the the Havell. I check my forehead for potential drips, then lean over the table. I hold back that I am not an Audubon fan; the famously life-sized waders, heads bent in ridiculous postures to preserve the scale, have always struck me as an exercise in egotism; the smaller hummingbirds and warblers are too busy. But this crow has a definite presence, a complexity of character, that warrants a closer look. A humped back dominates the image. With his right eye turned to the viewer, almost conspiratorial, the crow seems to smile.

Birds do not smile, of course. Still, the curve of the beak hints at sinister if understandable intentions. At his best, Audubon could create identification with a bird. The setting adds to the resonance. Audubon drew the crow against a black walnut — a nut whose fruit, or pericarp, can leave a stubborn tannin stain on one’s fingertips. Framed against the deep arch of the crow’s back sits a hummingbird nest, two tiny eggs there for the taking, vulnerable on this solitary branch.

I study the wing. I remind myself to savor the moment. There are times when the job of a college professor brings unarguable privilege. (With the flash of an id card, I can skip the line at the Library of Congress, where I once left a letter in the bed of a photocopier; the librarian let me carry on with my research.) This day, after arriving late and smelling like a pair dirty socks, I inspect a print worth my next few paychecks, even though I know nothing little about its author. Under the engraved black lines of the right wing lies a deep blue wash, some green or purple, almost indigo.

Audubon’s illustration reminds me of another crow — a pet bird named Tom that was trained by William Bartram, recounted in a little-known sketch called “Anecdotes of an American Crow.” It was my research in William Bartram that take me here. In 2010 I co-edited volume a collection of papers that brought much stress but unexpected rewards, William Bartram, the Search for Nature’s Design: Selected Art, Letters, and Unpublished Writings. A few months earlier, when I received an unexpected email inviting me to Auburn University, it was in recognition for this book. William Bartram was most famous for a book of travel that he took through the southern colonies and Indian territories right before the American revolution — a book with a long title simply called Travels. Most people know Bartram through that one work. My co-editor and I, however, recovered a huge amount of material from the long span of Bartram’s life. We brought to light unnoticed drawings, letters, philosophical essays, a diary from his garden and papers from his family’s business. Bartram was born in 1739, in a little village outside Philadelphia called Kingsessing, and he died in 1823, at his home, under a pear tree planted decades earlier by his father.

When I study the Havell print at Auburn, I think not only about the lonely and arresting crow, but also about nests. I am alone in Alabama, away from my wife and out son until the week after Thanksgiving. Efforts to settle our boy in an Auburn middle school failed; we would have to split for several months, together only on weekends. The Auburn gig strips me from my nest. I feel like the crow.

Next: Palatka, Fla. -- How to Approach Bartram's "Travels" →