Like most people, I vividly remember the morning of September 11, 2001. And like many people, my memories do not entirely check out.

I thought I was prepping a class, American Literature to 1860. 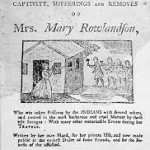 I was at USF, working as an adjunct, in my first semester since moving to the Tampa Bay area with Julie. We were early in the semester, and I want to say that I was preparing a discussion of Mary Rowlandson’s Sovereignty and Goodness of God–a narrative of violence and captivity about King Philips, or Metacom’s War, in seventeenth-century Massachusetts. I was in the library when news of the attacks broke The school closed immediately and we were cleared from campus, though I paused at a tv monitor in the library lobby to watch the Twin Towers smolder in flames.

When we came back the next week, the class resumed our study of early American literature–picking up, in my mind’s eye, with Rowlandson’s account of warfare, captivity, and Puritan entitlement. In the aftermath, which included attacks on Afghanistan and Iraq, we returned again and again to what historian Jill Lepore called “the language of war,” or how communities justify violence through a rhetoric of entitlement and holy mission.

That term, I thought, I fulfilled my charge as scholar of American literature admirably, bravely and acutely demonstrating to students how lessons from the past apply today. Rowlandson offered a particularly uncanny prompt. So much of the language in her account found its way into speeches by our national leaders that we need to learn these verbal tics.

But here’s the problem. On the morning of September 11th, we were not reading Rowlandson. Years later, after going back to the syllabus, I see that I had actually scheduled her the previous week. The direct connection between a threatened Puritan “City on a Hill” and September 11th mostly existed in my head.

On the night of the attacks, then President George W. Bush gave a talk to the nation. This moving, exceptionally well-crafted speech presented the attacks on the Twin Towers and the Pentagon as nothing less than Good versus Evil. “Terrorists can shake the foundations of our biggest buildings,” the President intoned, “but they cannot touch the foundations of America.” With skillful use of the passive voice and chiasmus (a rhetorical use of opposites), his speech glossed motives: “America was targeted for attack because we’re the brightest beacon for freedom and opportunity in the world.” In place of explanation, Bush recycled language straight out of Puritanism. He closed with a snippet from Psalms, consoling a shaken nation:

Tonight I ask you for your prayers for all those who grieve, for the children whose worlds have been shattered, for all those whose sense of safety and security has been threatened. And I pray they will be comforted by a power greater than any of us, spoken through the ages in Psalm 23: ‘Even though I walk through the valley of the shadow of death, I fear no evil for you are with me.’ [….] None of us will ever forget this day, yet we go forward to defend freedom and all that is good and just in our world.

With two decades behind us, one can better see how these healing words came at the expense of explanation. Of course our nation grieved death and loss. But the United States was not attacked because we are “the brightest beacon for freedom and opportunity in the world.” A country gets into trouble when it believes itself to be “all that is good and just.” (No nation ever is.)

Back in class that Fall, we reviewed Bush’s speech carefully. I asked students to think about the words we use to frame a war. For Mary Rowlandson, Native Americans serve as implements in a test of faith: “I have often thought since of the wonderful goodness of God to me ….” From the distance of four centuries, students easily recognize how the language of entitlement was used to explain away a war. White people were stealing their land and the Native were pissed. (Seems obvious today.)

But two decades is not four hundred years, and even in 2022, many of us still struggle to give the enemies real motives. Why the attacks on September 11th? Why would people choose to fly airplanes into our buildings?

In the face of trauma, we misremember. That is human.

Throughout the Fall 2001, I felt as I had been religiously called to be a teacher. Current politics aligned with the course material, and in profound ways, I helped students connect past and present. I was my most noble, teacherly self.

But I was wrong on several counts. When reviewing my notes from that Fall, I see my syllabus did not read Mary Rowlandson on the week I imagined. I also looked at student evaluations. Where I thought I had been super-teacher, my course evaluations actually fell on the low side.

I cannot tell you, ultimately, whether I was doing a good job. What I can say, on the twentieth anniversary of the attacks, is that we should think about how we remember. It is morally wrong to continue relying upon a status quo. Blind faith in the healing words of 2001 enabled craven manipulation by our president’s cabinet, justifying an invasion of Iraq for reasons that have not checked out. Troops remained in Afghanistan for twenty years, costing tremendous human life and loss. To the soldiers who served, we say thank you. But we may also want to apologize.

Pay attention to the anniversary language. The truth is rarely as simple as it seems. If you look at your own story, where do the memories break down? What did you believe at the time? Where were you right? And where have you confused the past? Did this misremembering help spin a deception? Remember, yes. But verify. Then vote.

from A Road Course in Early American Literature: Travel and Teaching from Atzlán to Amherst (University of Alabama Press, 2021).

My dad, never ones to leave the calendar open, thought nothing of loading the kids into the station wagon for a...