Mexico City: The Heart of Atzlán 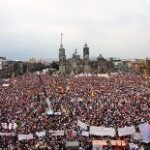 Everyone knew the election was fixed. No votes had been cast, but the Partido Revolucionario Institucional (PRI) controlled the money and the media, and the party had dominated Mexican politics through the past century. A victory for PRI candidate Enrique Peña Nieto looked like a foregone conclusion. Rumors swirled. Demonstration was in the air. The opposition rallied.

A week before the July 2012 decision, supporters of the Partido de la Revolución Democrática (PRD) flooded the central square of Mexico City, the Zócalo, to support candidate Andrés Manuel Luis de Obrador. Wearing yellow PRD shirts, waving yellow flags, and carrying banners, Obrador’s faithful followers marched from the edges of the city’s casco historico to the seat of government. The crowd gathered to a site of prophecy: where the Hummingbird God of War Huitzilopochtli led the Aztec-Mexica people after two centuries of exile; to the symbolic site of the Mexican flag, where a condor devours a snake atop a nopál, or prickly pear cactus; where Hernán Cortés met Moctezuma II in 1519; the heart of Tenochtitlan, where the invading Spaniards built a capital city. Once believed to be the center of the universe, the site now fronts the national cathedral and seat of government, the space for manifestaciones.

The events caught my friends and me off guard. We were there for a National Endowment for the Humanities seminar, as professors and graduate students studying the links between Mesoamerica and the southwestern United States. Along with two art historians, Nina and Lauren, I had spent the morning in a museum, lost among colonial altarpieces, reliquaries, and arcane portraiture. A lecture was scheduled that afternoon back at our hotel, off the Zócalo, but the rally complicated our plans. With our heads still in the colonial era, we stepped up to Calle Tacuba—an ancient street laid over the causeway that once crossed Lake Tezcoco. I checked my wallet and disappeared into the crowd. The three of us started back toward the sacred square. Somehow, we reached our hotel, where we found that class was canceled. So we gathered with other colleagues in a room overlooking the Zócalo to watch the unfolding events.

Being left-leaning academics, we treated the manifestación like a party. (No class, fiesta!) A senior scholar ordered up sangria, cerveza, and appetizers from room service. We took turns on the balcony, cheering for speakers from our perch. The past is present in Mexico City. The colonial-era buildings off Calle Tacuba lilt to the side, the foundations settled into the filled lake; the site of today’s manifestación sits atop the prior ceremonial complex, now a nation’s spiritual heart, where folk dancers and activists advocate for rights and heritage, vendors hawk tourist items, and where a drum and bugle corps marches out each morning to raise a massive tricolor Mexican flag. The rally’s symbolic force was not lost on a room full of academic tourists. We would not cast a vote, yet we followed each speaker as our own. We declared vicarious loyalties to the PRD. When Manuel de Obrador gave his speech, we clapped along, the rally reached an emotional pitch, the entire square throbbed in yellow, and when a band started playing, we danced too.

William Carlos Williams once wrote: “Poetry is a rival government always in opposition to its cruder replicas.” The poet captured how humanities scholars think. Even though we held a slim grasp of Mexican politics, we harbored vague sympathies for the progressive minority. In literary studies (and far more than most historians admit), we imagine a future by sifting through possible pasts, theorizing prolepsis. It was a proleptic past, truth be told, that took us to Mexico City in the first place. Our six-week seminar was premised around the search for Atzlán, the mythic home of the Aztec-Mexica, the place of white herons, believed to be somewhere in the US Southwest. The Aztec-Mexica left Atzlán in 1111 CE (Year 1-Flint in the Mesoamerican calendar) and slowly wandered south, founding the capital city Tenochtitlan in 1325 (dates varying, again, with calendars). 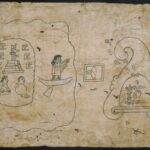 It is the American Exodus, an originary story sharpened later by the Spanish and gringo invasions. Since the Mexican-American War of 1846–1848, Atzlán has served as a cri de coeur, a rejection of the boundary dictated by the Treaty of Guadalupe Hidalgo, which set the US border at the Río Grande, and a galvanizing force during the Chicano movement of the 1960s. Atlzán still holds currency to this day, in a manner that William Carlos Williams would like to hear, first conceiving politics through poetry.

I cannot emphasize enough the impact that the NEH seminar had on my understanding of American letters—and, well, teaching in general. (Such disclaimers are necessary in this day and age, as humanities programs fall under continued attack.) Our six-week seminar traced the migration from Atzlán in reverse: three weeks of classes in Mexico City, followed by more travel and reading in northern Arizona, New Mexico, and the Hopi mesas. Twenty-five fellows, plus the codirectors and visiting faculty, set out on a mythic-historic recovery of a lost homeland. The literature moved us across borders, over the Rio Grande, and through historic time. When I initially applied for the seminar, I argued to the director that I would use these materials to start my courses in early American literature. That has, in fact, turned out to be the case. I incorporate texts from Mesoamerica into the early units on orality and indigenous writing systems. But with the experience, my thoughts turned in even less expected directions. First, the journey reversed my sense of time. Trained as a literary historian, wired by my academic training to break cultural movements into temporal units, I had not yet embraced how the human imagination jumps back and forth. When we start from place, such as Mexico and the traditional homeland of Atzlán, temporality succumbs to use; rather than dates and succession, we think instead about how these texts have worked—and continue to work—on us. I am increasingly comfortable with the notion of literature as a memory space, in which we enter and reconsider our individual and collective relationship to a living past. Literature clears open this momentary space of transgression. And to a second point, this alchemy occurs best in groups. In the transit from Tenochtitlan to the present-day Unites States, something remarkable happened with our group. The seminar itself became its own liminal space. Sequestered for a short time, scholars could cross into a temporary site of transformation. Great courses work this way. We come together, and as one unit we are moved by the literature, then the class ends. We go back to our quotidian lives. Inspired, momentarily, we are changed.

On the day of the manifestación for Obrador, the symbolic square filled and emptied like magic. The PRD supporters flooded the Zócalo, the opposition candidate churned up the crowd, the band played, we danced, then the vast square emptied—more quickly than it had filled. In less than an hour, the symbolic seat of state was nothing but tidal detritus, banana-yellow banners and discarded paper flags. The rally finished well past dinner. Reality set in. We were starving. I hit the streets with two of my classmates, Emily and Mark. The three of us were at an in-between place in our lives. Mark, a fresh PhD from Tulane, was teaching in rural Louisiana; he was lonely. Emily, a Chicago native, was deciding whether she should continue teaching at community college or leave academia. I was trying to figure out the purpose of this book, the constant yet illegible intellectual tug.

The three of us stumbled onto a downtown bar that turned out to be the site of an unofficial after party for the PRD. The tavern buzzed with the laughter and bonhomie that follows righteous, anticipated defeat. Over plates of food and pitchers of beer, spontaneous cheers broke out: “Obrador! Obrador! Obrador!” Mugs were raised for a toast. Mark, Emily, and I clinked with the family next to us. We formed a temporary friendship.

The father drifted from his table to ours. “What are you doing here,” he asked in deliberate, grammatically perfect English. Mark did the talking. (He had a chilanga girlfriend once and spoke the best colloquial Spanish.) Mark explained the purpose of our seminar. We were in Mexico City for three weeks, then two weeks in Arizona and New Mexico, studying the ancient but continuing links between Mesoamerica and the desert Southeast. Following exhaustive readings in archaeology, we would travel from the capital city to the pyramids at Teotihuacán, to the Hopi Mesas in New Mexico, and the deserted ruins of Chaco Canyon, near the present-day Four Corners. Our Mexican friend, beer in hand, nodded politely, as Mark explained in impeccable Spanish the recurring motifs in Aztec and Anasazi art, dual traditions traceable to the ancient Olmec and Toltec people, and the continuing political relevance of Aztlán—the place of white herons, the fabled country to the north.

Mark paused. Before he could continue, I blurted out in my half-forgotten undergraduate Spanish,  “Estamos buscando Atzlán.” The remainder of the conversation is lost in beer. Our friend rejoined his table, we toasted and exchanged more sympathies. Another round. Then our friend came back to the table. He squared his shoulders, pointed to his chest, and said “Atzlán is in here.”

Our friend gave us instructions on how to find Atzlán. He told us to read Carlos Castenada. He told us to score peyote and journey to the Zona del Silencio, a pocket of the Sonoran Desert where radio frequencies fail, and to wander the chichimeca wilderness. If we could not get peyote, we should try mushrooms. I explained that we had a tight itinerary. We joked about narcotraficantes. Our friend agreed that the desert Southwest would serve, and if we could not find hallucinogens, we should drink mezcal. Not tequila. Nor just any mezcal. We needed Mezcal from Oaxaca. A deal was struck. Buzzing with solidarity across borders, and with a presidential decision in our own country approaching, hopes high for Barack Obama’s reelection, we promised to seek out the country of white herons—not only in our research and travels, but in the deeper spiritual homeland, in the faintly lettered terrain of our gringo hearts.

from A Road Course in Early American Literature: Travel and Teachin from Atzlán to Amherst (U Alabama Press, 2021).

← Prev: Misremembering Mary Rowlandson on the Anniversary of September 11th Next: Philadelphia--Franklin's Walk →

The page you requested could not be found. Try refining your search, or use the navigation above to locate the post.