When a book project lulls, I think about The Adventures of Huckleberry Finn. I think about Cairo, Illinois. At the end of Chapter 16 in Huck Finn, where the Ohio River meets the Mississippi, the premise snaps. Huck and Jim bypass a slave’s path to freedom, Huck famously refuses to betray his runaway friend, a steamboat captain plows over their raft. Huck unwittingly sees the light on American racism.

A children’s book suddenly got way too serious. In his first draft. Twain set the story aside here. He came back to the manuscript later, but in published form, the novel downstream reads like a sack of stale Halloween candy — mishaps with the Duke and the King, more adventures with Tom Sawyer, the bogus conclusion where we learn that Jim was already free.

Some teachers avoid Huck Finn because of the language or volatile social content. I avoid the book because I don’t want to go back downriver with the Duke and the King. 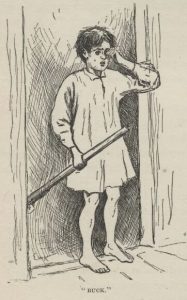 Still, Huck Finn stands at the crux of my own education. In a seminar paper from college, I wrote about Chapters 17-18, on the Grangerford feud, just past Cairo. This short essay, what I then considered my best work, served as a writing sample for entrance into graduate school. Scarcely looking past the text (it was the 1980s), I argued that Twain shifted gears to the feud after reaching a geographic-moral crisis.

In this short episode, Huck meets his doppelganger — “Buck.” Buck shoots members of the Shepherdson family, for reasons unknown to him. Because it’s a feud. Neither Buck nor Huck, products of their environment, can process the roots of their everyday reality — be that racial prejudice or a feud. We are all bleary-eyed, childish and holding a rifle.

Thirty years later, I still mull over the lapse at the two rivers. I want someone to write Huck Finn 2. “Kiss my ass,” a woke Jim tells the expendable white kid, “I’m going to Canada.” Then Jim steers up the Ohio.

With a manuscript stalled at a critical moment, I think about Huck Finn a lot these days. My Road Course in American Literature is winding through the elaborate process known as double-blind review. I have reached an impasse, what I hope to be a productive lull.

More than I care to admit, the Road Course is a glorified revision of my college seminar paper. The college essay is embarrassing to read, typewritten on onion-skin paper, but my 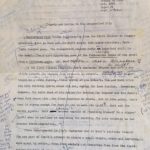 story is basically the same. The Road Course starts from points in space to ask how we as Americans understand one another. I’m not in Cairo, Illinois but the point remains. In a literature class, we read across physical and rhetorical divides — imagining worlds between students and teachers, teachers and texts, student and student.

We all find ourselves, at some point, on the raft with strangers. Or with strangeness. Pressed to rethink our relation to society. What stories do we tell? And when do the stories split apart?

These questions are not easy. But they make up the central work of a survey course in U.S. literature.

Many of my academic colleagues see no need for national surveys. Scholars point to a tired story of nationhood that grows from false colonial roots; we reify borders that no longer exist. That never existed. I get that. But If we should no longer think about nation-states, I ask, why is the U.S. army spooling concertina wire along the Río Grande?

Bound to trite historical narratives, we miss the essential work of the American survey, the process of reading together. Within shared space, we try to figure each other other out. Huck and Jim. Twain and his nineteenth-century audience. Present and past and present. You, dear reader, and me.

No easy answers bridge these divides. The best attempts at narrative coherence fracture and stall. Like Mark Twain at Ohio River, I have now set my Road Course aside. For the time being, I will also put this website on hold, until I hear back from readers. My plan is to add more as the book winds its way through production, as manuscript becomes a book.

Over the next few months, the Road Course will float beyond my control, following the currents and shoals of colleagues who are much smarter than me. After hearing their advice, I hope to rudder a manuscript to a completed form. Maybe my raft will drift back to shore. I will make the suggested changes and drift downriver to story’s end. I will carry this project to completion … though not with the Duke and the King.