Boosters wanted  a tourist driver. Signs, interpretative kiosks and a pamphlet map led motorists down the De Soto Trail, a state-sponsored route that opened in 1985, loosely following the famed conquistador’s path from his entrada at Tampa Bay to the army’s winter quarters in present-day Tallahassee. 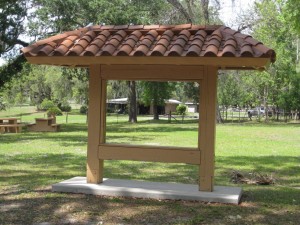 Bob Graham, Florida’s governor at the time, proceeded over the dedication of the first marker at Inverness, an hour north of Tampa. The kiosk interpreted Tatham Mound, a touchstone site in the route’s scholarly reconstruction. Inside this twenty foot midden, archaeologists discovered bones hacked by Spanish steel and glass beads in a unique chevron (six-sided) shape, directly linked to De Soto.

For the dedication the Crystal River High School played the Star Spangled Banner. A corseted Queen Isabella stood alongside a silent, bare-chested Timucuan Indian, as the governor pulled a veil off the barrel-roofed kiosk. 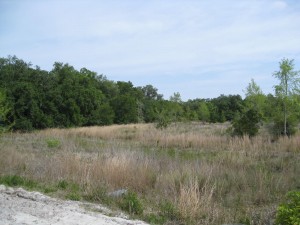 No sane person would venture to the actual site described. Tatham Mound sits deep in the Cove of the Withlacoochee, a borderland. Archeologists found the mound by following a map from the Seminole War. Osceola took his war parties there for tactical cover and spiritual retreat. The Seminoles learned the swampy landscape from black maroons, refugees from the British slave colonies. For Florida’s first people, the Withlacoochee (or Little Big Water) marked the division between the coastal Safety Harbor cultures and the farming Timucuans.

Always eager to connect literature and place, I set out with my wife Julie for Tatham Mound late one Spring. I borrowed an old GPS navigator from my campus rec office, plugged in the coordinates and secured a camping permit at the Wildlife Management Area nearest the midden. The summer rains had not started yet. We would follow a jeep trail from hammock to hammock, island hopping through the swamp until we reached Tatham Mound.

On day two of our hike, the GPS display arrow pointed to a barbed-wire fence. We followed a jeep trail toward the river, hiking down a sandy road pocked by feral pigs. The display told me Tatham Mound, one quarter mile to the East.  I looked right, to a thicket of scrub oak and saw palmetto. Julie said she would mark our position. I disappeared into the scrub.

The screen said 400 feet. 200 feet. I tore through the saw palmetto and smilax, a serrated vine with leaves shaped like arrowheads. The smilax ripped my shins. I could barely see over the scrub, so I climbed between two dwarf oaks for a prospect. Saw palmetto is a favorite habitat for rattlesnakes; we were hours from the nearest hospital. According to the GPS, I should be standing on the mound. Smilax raked across my face. It was time to abandon the search.

I tried not to panic. I followed the arrow on my GPS due West, threading through the tangle of scrub and serrated saw palmetto. Julie had not moved. Without the rush of adrenalin, I felt the thorns. My path was gone. “Marco,” I cried out.

A nervous voice returned from the woods, “Polo.” 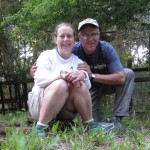 We traded calls. Our exchanges grew louder. I stumbled onto the pocked dirt road. But which direction to walk? In retrospect, I realize we had passed Tatham Mound a few hundred yards back, an inauspicious hill covered with oak next to a dry prairie. But what had I expected to find there? The stubble of a corn field left by maroons? Seminoles in ceremony? Was I going to ask the bones how they felt about about Hernando de Soto?

For now I was lost. Julie yelled again from behind a stand of saw palmetto. I hollered back. “Tom,” she cried. Julie had been standing alone for thirty minutes, left to worry about feral pigs. With no map or directions. On private land, because her husband was trespassing on a protected site.

I could blame the folly on the now-primitive GPS. Or my poor maps. I could rationalize what business, as a literary scholar, I had in seeking out funereal middens. None of that changes the greater error. I had marked every spot before the trip, every campground and landmark. But in the final pursuit I overlooked the most important coordinate of all. I forgot to flag my wife.

For a video field report, check out Searching for Tatham Mound. For the reading behind this misadventure, check out my review essay, Texts and Bones: Scholars on De Soto.