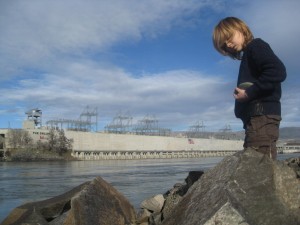 In 1957 the US Army Corps of Engineers turned this spot, Celilo Falls, into Lake Celilo, destroying one of the most productive fisheries in North America. Before the dam was built, the nChe-Wana (‘Big River’) dropped through a narrow notch on a broad flagstone table, then tumbled over cascades that were ideal for harvesting salmon. (Check out some of the other videos on youtube.) People came from the Great Plains to California to Alaska to fish, trade, gamble and frolic. The history of Wyam, or “falling water,” matters more than words can say. Each fishing spot had a name:

Today those names murmur under a roiling half-silence. Indians still fish and Celilo hangs on as a hardscrabble town, severed from Wyam by the train tracks and interstate, but most white travelers pass without giving the place a second thought.

I took the kid here to understand the stories about Coyote and salmon. It was shortly after we adopted him. In one story, five beaver sisters (or Yuka-mah) were blocking the nChe-wana at Celilo. The salmon could not migrate to spawn. Coyote disguised himself as a baby, climbed into a basket and floated down to the sisters’ lodge. Against the advice of the youngest Yuka-mah, the sisters took in the disguised trickster. Each morning, they left Coyote behind and dug for roots. Coyote carved five wooden hats while they were gone. Then he started to destroy the dam. When the sisters discovered his mischief, they clocked him on the head. They shattered his first cap. They hit him again and broke the second hat, then a third time and a fourth. Before the fifth blow, now wearing his fifth hat, Coyote destroyed the dam. “Ha-a-a-a-aha!” he howled. “The new people will come and all will have fish. You cannot keep the Salmon this way. Salmon must be free for all.”

My son knows fish. He was born under the Pisces sign. Even more than throwing rocks in the river, he loves to fish. Fishing is one thing he and I can do without fighting. Since he came to live with us, after four years in foster care, we have fought a lot.

My son also harbors a keen sense of right and wrong. In this picture, he is tuning his moral compass to the story of the salmon. He is thinking about rocks to throw in the river. He is searching for the best stone to make the biggest, loudest splash. But most of all he is thinking, Salmon must be free for all.