Three Crows and a Raven–Bibliographic Essay

My focus on the sketch in this chapter stems from my experiences teaching a particular genre, the ornithological biography. In classes on nature writing (less so, than in the survey), I often ask students to study a flower or bird, then write an illustrated essay combining scientific and belletristic modes. The ornithological biography, I maintain, is a lost form, and Poe’s poetic-fiction trades equally in the scientific culture of the time.

The emergence of ornithology as a scientific discipline has been covered by Paul Lawrence Farber, Discovery of Birds: The Emergence of Ornithology as a Scientific Discipline, 1760-1850 (1997). Historians of science and art historians have traced the emergence of ornithology alongside the aesthetics of that field. The best examples of ornithological biography arguably come from Audubon’s Scottish predecessor, Alexander Wilson, a scientist-author who has sadly been relegated to footnote status. Wilson’s American Ornithology (1808-14), is long out of print, and his illustrations are accessible online through the American Studies Program at the University of Virginia (xroads.virginia.edu). Clark Hunter prepared The Life and Letters of Alexander Wilson (1983), and Michael Ziser prepared an online edition of Wilson’s poetry for the Early Americas Web Gateway (mith.umd.edu). Wilson’s place in American ornithology is the subject of Edward H. Burtt and William E. Davis, Jr., Alexander Wilson: The Scot Who Founded American Ornithology (2013). Laura Rigal offers the rare critical discussion in “Empire of the Birds: Alexander Wilson’s American Ornithology” (1996). Ann Shelby Blum distinguishes between Audubon as artist and Wilson as illustrator in Picturing Nature: American Nineteenth-Century Zoological Illustration (1993). Wilson learned ornithology from Bartram, and this biographical link alone underscores the connection to Audubon, his better-known rival, and prominence of the ornithological biography as a genre. 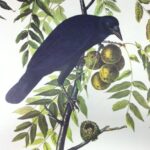 Understanding Audubon within that context of genre, alas, requires outstanding library resources. Only 120 complete sets of his masterpiece, Birds of America (1826-38) survive in full, and the five-volume Ornithological Biography (1831-38) challenges the most tireless readers. Fortunately both are accessible online through the University of Pittsburgh’s Darlington Digital Library Collection (digital.library.pitt.edu). Abridged and selected volumes of Audubon are also readily available. Audubon’s granddaughter, Maria Rebecca Audubon, prepared an edition of unpublished writings, Audubon and his Journals (1897). A Library of America volume, Writings and Drawings (1999), edited by Christoph Irmscher, includes a well-chosen selection of plates, essays from the Ornithological Biography, letters and journals, and a corrected version of the “Mississippi River Journal.” Daniel Patterson’s edition, John James Audubon’s Journal of 1826: The Voyage to The Birds of America (2011), replaces the one by preeminent Audubon scholar Alice Ford; Patterson’s introductory essay is notable for its review of scholarship and proprietary instincts of Audubon’s followers.

Creative writers and other artists have dipped deep into the Audubon well. Works inspired by the naturalist include Robert Penn Warren’s Audubon: A Vision (1969); Eudora Welty’s short story, “A Still Moment” (xroads.virginia.edu); Pamela Alexander’s Commonwealth of Wings: An Ornithological Biography (1991). Audubon has been the subject of several lyric and/or critical essays: author Scott Russell Sanders’ expresses appreciation for the backwoods quality of Audubon’s voice in “Quill Pens” (1985); and Franklin Burroughs explores birds and archetype through Audubon in his searching “Passion or Conquest” (1997).

Ralph Hyde reviews the career of Audubon’s chief engraver in “Robert Havell Junior, Artist and Aquatinter” (1984). Christoph Irmscher explores the tension between subjectivity and fact in “Violence and Artistic Representation in John James Audubon” (1995). Linda Dugan Partridge situates Audubon within the context of artistic-scientific tradition in “By the Book: Audubon and the Tradition of Ornithological Illustration” (1998). Michael Ziser, one of few authors to connect Poe and natural history writing, theorizes interchanges of the avian and human self in “Animal Mirrors: Poe, Lacan, Von Uexküll, and Audubon in the Zoosemiosphere” (2012). James W. Armstrong frames the biographical presence against biographical erasure in the images; see, “Audubon’s Ornithological Biography and the Question of ‘Other Minds'” (1997). Eliza New examines the relations between perception, experience and power in “Beyond the Romance Theory of American Vision: Beauty and the Qualified Will in Edwards, Jefferson, and Audubon” (1995).

The literature about William Bartram is also extensive, although mainly focusing on his published Travels (1791). Almost nothing has been written about “Anecdotes on An American Crow.” This essay, long out of print, appeared in the Philadelphia Medical and Physical Journal (1804), a short-lived miscellany edited by his occasional collaborator Benjamin Smith Barton. Thomas P. Slaughter includes this and other short essays in the Library of America volume, Travels and Other Writings (1998); one of the few discussions of Bartram’s crow appears in Slaughter’s father-son biography, The Natures of John and William Bartram (1998). Several editions of Travels are available; the book can be accessed at the University of North Carolina’s Documenting the South site (docsouth.unc.edu), and Francis Harper’s Naturalist Edition (1998) remains the standard edition. On Bartram’s later work, including the period in which he wrote the crow essay, see William Bartram, the Search for Nature’s Design: Selected Art, Letters & Unpublished Writings (2009), which I co-edited with Nancy E. Hoffmann. Contemporary followers may want to consult the website of the Bartram Trail Conference, a group responsible for memorializing his author on the present-day South (bartramtrail.org). More poets, essayists and novelists that I can mention here have drawn from Travels; for a one-volume sampling, see Dorinda G. Dallmeyer (ed.), Bartram’s Living Legacy: The Travels and the Nature of the South (2010). I discuss the contemporary fixation with the eighteenth-century author in “Drawn from Nature: Vivification in the Botanic Art of William Bartram” (2009). Artistic responses to Bartram also are too numerous to mention; notable examples include Mark Dion’s 2008 project, “Travels of William Bartram Reconsidered” (markdionsbartramstravels.pcah.us), and Philip Juras, The Southern Frontier: Landscapes Inspired by William Bartram’s Travels (2012).

Poe scholarship has enjoyed both admirers and detractors since his 1849 death, drawing more critical writing than the non-expert can cover. My dissertation advisor Kenneth Silverman wrote the current definitive biography, Edgar A. Poe: Mournful and Never-ending Remembrance (1991); Dwight Thomas and David Jackson chronicle every word, belch and insult ever issued to, or at, the beleaguered author in The Poe Log: A Documentary Life of Edgar Allan Poe, 1809-1849 (1987). Poe texts are easy to come by, although for classroom purposes, I have enjoyed particularly good luck with Jared Gardner and Elizabeth Hewitt’s edition, Edgar Allan Poe: Selected Poems, Tales, and Essays (2016), which “curates” critical debates through the lens of current scholarly concerns. The Edgar Allan Poe Society of Baltimore offers a clearing house of works in the public domain (eapoe.org).

A storyline of Poe criticism can be drawn from Gardner and Hewitt, and from the many one-volume collections of criticism. The story starts with two keynotes: the personal reputation of the author and his style. Rufus Griswold’s “Death of Edgar A. Poe” (1849) claims Poe as an exemplar of American verse, equal to English poets, yet Griswold is also responsible for slandering Poe after death, initiating the fascination with his biography. That Poe is “important” claims a significant share of the criticism, leading critics to note his influence on French poets, particularly Charles Baudelaire, who poised the formal beauty in Poe’s work against from the din of democracy; see “New Notes on Edgar Poe” (1852-55), reprinted in Gardner and Hewitt (above).

Poe emerged as a figure of ghoulishness by the early twentieth century, while faring poorly at the same time in scholarly literature, especially with the rise of New Criticism; for a classic rejection, setting up still more counter-defenses, see Yvor Winters, “Edgar Allan Poe: A Crisis in the History of American Oscurantism” (1937). F.O. Matthiessen extends the long transatlantic discussion of Poe, concluding that while Poe falls outside the main currents of American thought, he stands as an innovator in international literature; see his apologist essay, “Poe” (1946), published in one of the cradles of new criticism, The Sewanee Review.

Reflecting the mid-twentieth century split between critical and creative writing, the more sensitive engagements have come from poets and novelists. A thread throughout these writings is “how can something so bad be this good?” Poet-critic Allen Tate claimed Poe the southerner as one of his own, wondering how a poem as maudlin “The Raven” still managed to move him, in his introduction to Poe’s Complete Poetry and Selected Criticism  (1949). Tate’s assessment, along with the many other writers to quip and comment on Poe (Rufus Griswold, Margaret Fuller, Henry James, etc.) have been reprinted in readily available essay collections, including Robert Regan (ed.), Poe: A Collection of Critical Essays (1967); I.M. Walker, Edgar Allan Poe: The Critical Heritage (1986), and Eric W. Carlson (ed). Critical Essays on Edgar Allan Poe (1987). Novelist E.L. Doctorow (first initial standing for Edgar) memorably described his namesake as “genius hack” in a talk before the Poe Society, “Our Edgar” (2006), published in Virginia Quarterly Review. Since the 1980s, scholarly interest in Poe has turned to corner, as critics have focused on his “cultural work,” yet this reassessment follows the imprimatur of Toni Morrison’s Playing in the Dark (cited above), the first to chart Poe’s imaginative uses of “blackness.” Poe scholarship limns a boundary between the critical and creative. Daniel Hoffman’s classic Poe Poe Poe Poe Poe Poe Poe (1972), for example, blends the personal essay and close reading in an effort to sneak past gate-keeping New Critics.

“The Raven,” being the poem that made Poe famous and the work for which he is best known, is a microcosm of scholarship about him. Critics generally note that the poem first appeared in The Evening Mirror on Jan. 29, 1845, and in The American [New York] Review shortly after, although Maureen Cobb Mabbott corrects us, noting in “Reading ‘The Raven'” (1982) the poem actually appeared first in an elocution manual. The earliest readers indeed praised the masterful versification; see Nathaniel Parker Willis’ preface, quoted in Rufus Griswold’s 1855 “Memoir” of Poe. The cultural footprint of Poe’s endlessly parodied and reprinted rhymes has been chronicled in Thomas and Jackson, The Poe Log (see above); in Scott Peeples’ field guide to the popular literature, The Afterlife of Edgar Allan Poe (2007); and in several essays to Eric W. Carlson (ed.), A Companion to Poe Studies (1996). Howard Mumford Jones attempts to rescue “The Raven” by situating the poem’s narrator within the context of nineteenth-century periodical culture in “Poe, ‘The Raven,’ and the Anonymous Young Man” (1955). Kenneth Burke, in what feels like a retort to Yvor Winters, uses the twinned texts of “The Raven” and “The Philosophy of Composition” to ask which comes first, criticism or art, in “The Principles of Composition” (1961). And picking up Toni Morrison’s theme, David Leverenz focuses on power reversals; see “Spanking the Master: Mind-Body Crossings in Poe’s Sensationalism” (2001). Several critics, finally, return to the split between art and analysis. Leland S. Person argues in a convincing deconstructive reading, “Poe’s Composition of Philosophy: Reading and Writing ‘The Raven” (1990), that a sealed-off (or hermeneutic) loops ultimately parodies any scientific response to art.

New, Elisa. “Beyond the Romance Theory of American Vision: Beauty and the Qualified Will in Edwards, Jefferson, and Audubon.” American Literary History 7, no. 3 (Fall 1995): 381-414.

Partridge, Linda Dugan. “By the Book: Audubon and the Tradition of Ornithological Illustration.” Huntington Library Quarterly: Studies in English and American History and Literature. 59, no. 2-3 (1998): 269-301.

Wilson, Alexander. American Ornithology; or, The Natural History of the Birds of the United States. Philadelphia: Bradford and Inskeep, 1808-1814. Accessed November 10, 2020.